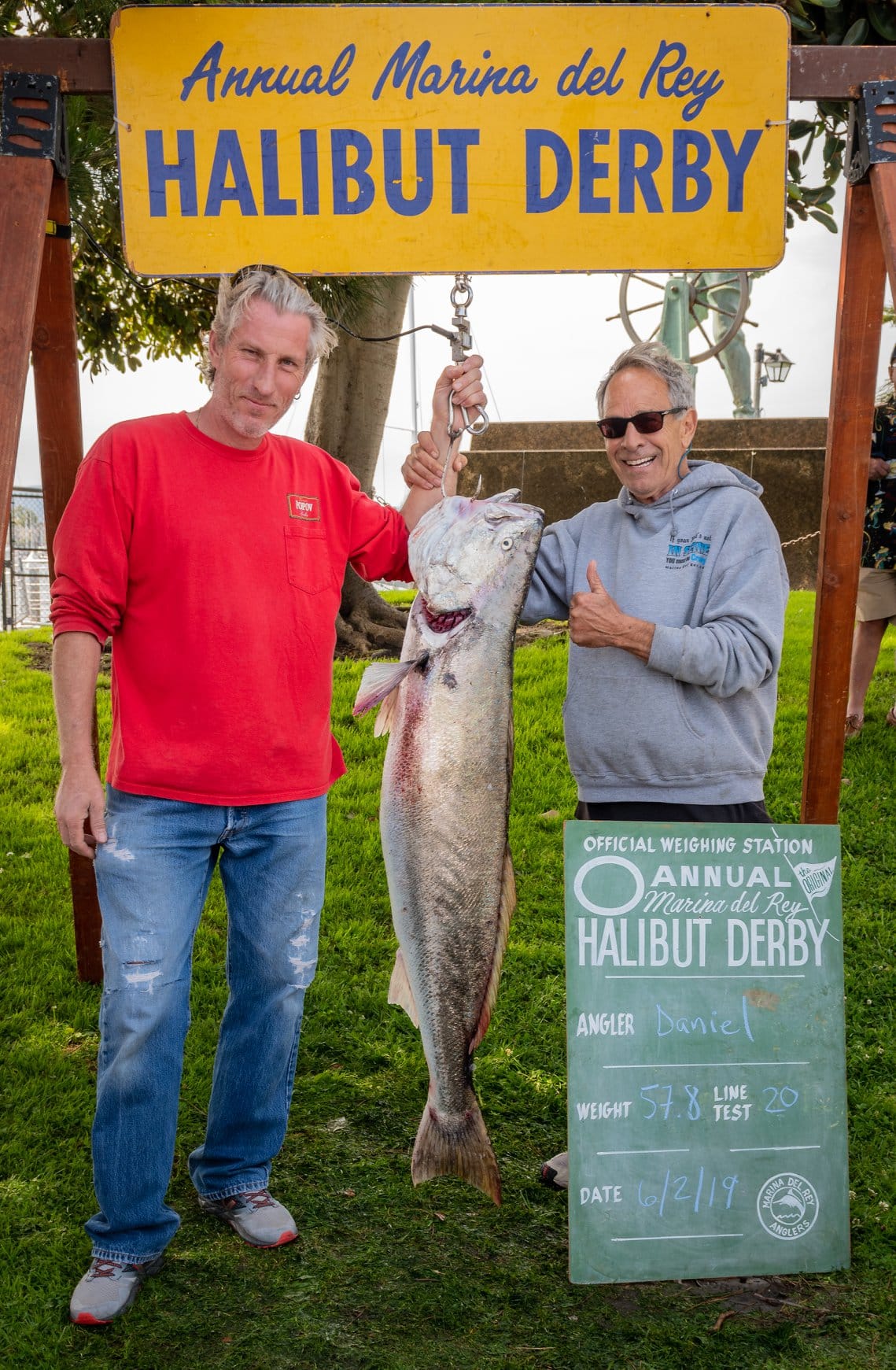 The chair of the event, Ramon Cendejas, described the event as very dramatic as on both days, there were big shifts on the leaderboard. At the end of day one, the anticipated first place fish did not swim away, as required, to earn the 25% live release bonus. At the end of day two, the winning fish arrived at the docks with just 3 minutes to spare and turned out to be a fish of a lifetime sized white seabass.

Several teams were hopeful, then had their excitement dashed as changes in the leaderboard took place throughout both days. Despite the drama, everyone was respectful and showed good sportsmanship.

The 80+ anglers powered through gray and misty conditions on Saturday, yet enjoyed good calm weather on Sunday as they searched for the winning fish. With the cold water, tides and moon, the bite was slow for most. Yet those who worked the fishing grounds did find some of the much-loved California Halibut to weigh in. Two scientists from Hubbs-Seaworld Research Institute were on hand to inspect the catch and verify the fish’s last meal and take other measurements. When the last fish came in, they also preserved its head to scan for a tag that could identify it as a product of the White Seabass Grow Out program.

The 2nd and 3rd place winners were on the same team–team “Na”–in association with Best Fishing Tackle Club, and they were well-rewarded. But the real story was team “Sea Yah”, captained by Jimmy Stathis, who powered in at the end to tie up at the docks proud as could be, minutes before the weigh in closed, with a massive 57.8 pound white seabass caught by his teammate Daniel Ahman. This was the first time a fish other than a halibut won the derby. The event primarily targets halibut, but added white seabass, lingcod, yellowtail, and calico bass to the mix when halibut catching slowed in Santa Monica Bay. The halibut are starting to appear locally in greater numbers and the derby is looking forward to a resurgence in angler participation. This year was up 20% over last year. So next year’s 45th is going to be bigger still.

The top prize was a fishing trip to La Paz to fish with Tailhunter International . 2nd and 3rd places were also awarded fishing trips. There was a separate team cash jackpot competition for the top three teams. The winners are as follows:

All anglers feasted on all you can eat tacos from Outback Catering, then enjoyed a fun awards ceremony and raffle. All of the participants are invited to attend the July 11th meeting of the MDRA fishing club at Burton Chase Park’s community room for a dinner meeting with special guest speakers and a tasty dinner so they can pick up their souvenir derby shirts that got delayed.

For more photos on the derby and information on the kids fishing or the veterans fishing programs please visit www.halibutderby.com. Fishermen in the area are encouraged to attend the MDRA club meetings. Check the MDRA calendar via www.MDRAnglers.com or on Facebook.