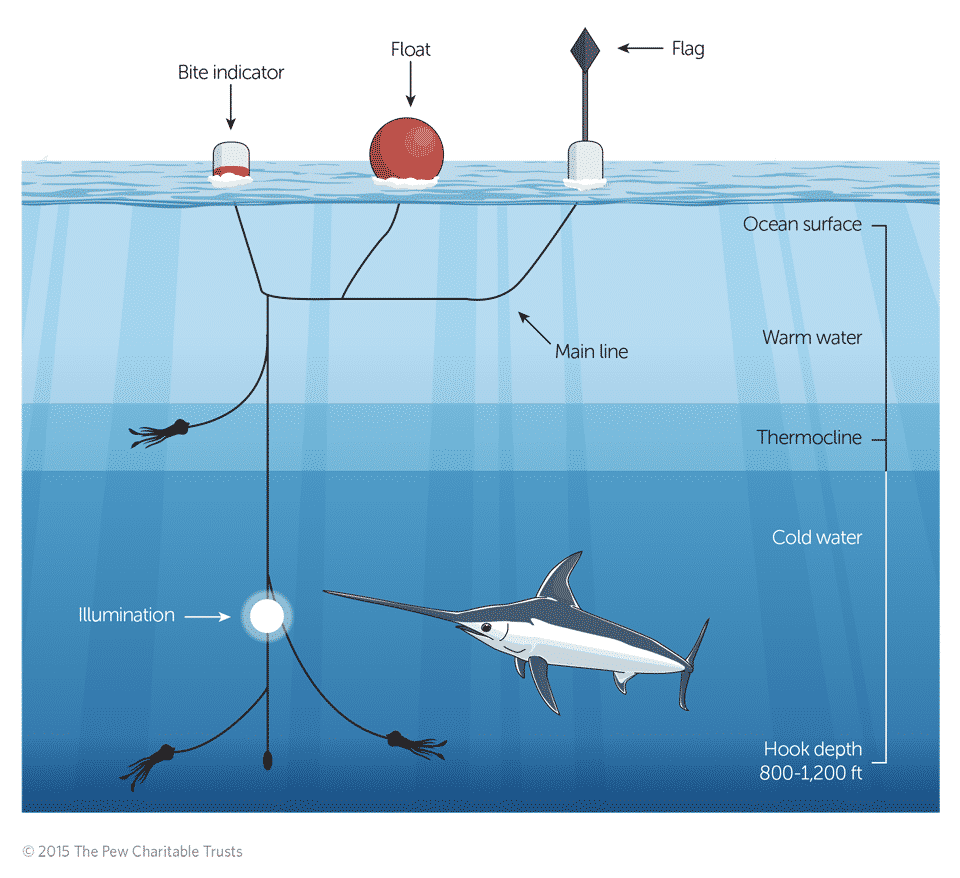 BOISE, ID — The Pacific Fishery Management Council voted to fully authorize deep-set buoy gear for the California Swordfish Fishery as the alternative to drift gillnets. It was a unanimous decision brought by the council and is a win for the recreational fishing industry and conservation as the new gear type produces far less bycatch.

This type of gear specifically targets swordfish very successfully at depth, and stands out because of its low bycatch and live release ability. Exempted fishery permit activity already has yielded a 98% marketable catch rate over the past six years of research and experimentation.

“By gradually transitioning to deep-set buoy gear, the booming recreational involvement in this fishery will continue to thrive,” said CCA CAL Chairman Bill Shedd. “This decision, along with proposed federal legislation on which I testified in favor of before a U.S. House of Representatives committee, will revolutionize the California swordfish fishery.”

In May,  Shedd testified before the U.S. House of Representatives Natural Resources Subcommittee on Water, Oceans, and Wildlife on behalf of the Driftnet Modernization and Bycatch Reduction Act (H.R. 1979).

Drift gillnets are invisible nets, fifty yards deep and up to a mile long that ensnare valuable swordfish, but also sea turtles and a whole lot more. The United Nations banned large-scale drift nets on the high seas twenty years ago. The U.S. has banned drift nets of any size in the east coast fisheries and the European Union disallowed drift netting among its 27 member states in 2002.

Also passed in the motion was that permit issuance is would be cumulative, and will add 25 permits each year until a maximum of 300 is reached. Any permits issued in previous years that were not issued or renewed will also be available each year. The National Fisheries Marine Service (NMFS) will also provide updates to the Council on permit issuance, though the number of additional permits issued each year need not be reconsidered nor approved by the Council annually.

That is very similar to recommendations that were made by the CCA CAL Government Relations Committee in a letter, which was also co-signed by the International Game Fish Association and Wild Oceans, in support of the final authorization of Deep Set Buoy Gear. The reason being so that any significant issues can be addressed and also to accommodate recreational fishing fishing activity, tournaments or other high profile, high value events.

A limited entry fishery, starting with 50 vessels, will foster economically for the DSBG swordfish market, and like the harpoon caught market, pays fishermen a higher price per pound than drift gillnet, longline, or imported swordfish. This reflects the high quality of deep-set buoy gear caught swordfish and low ecological footprint. By phasing in this fishery, the Council can support steady market growth and ensure supply does not outpace demand.

The Pacific Fisheries Management Council is one of eight regional fishery management councils established by the Magnuson Fishery Conservation and Management Act of 1976. With jurisdiction over the 317, 690 square mile exclusive economic zone off Washington, Oregon and California, the Council manages fisheries for about 119 species of salmon, groundfish, coastal pelagic species, and highly migratory species. The council is comprised of 14 voting members and 5 non-voting members.

To view the full motion that was passed, please visit www.pcoucil.org

The Coastal Conservation Association of California (CCA CAL) was created in 2015 when recreational anglers and outdoor enthusiasts grouped together to work for the conservation and enhancement of our marine resources and coastal environments.

Today, we are working to protect not only the health, habitat and sustainability of our marine resources, but also the interests of recreational saltwater anglers and their access to the resources they cherish and use on a daily basis. CCA CAL currently consists of 2,500 members spread across 6 local chapters in Southern California, and is working to expand in Central and Northern California.