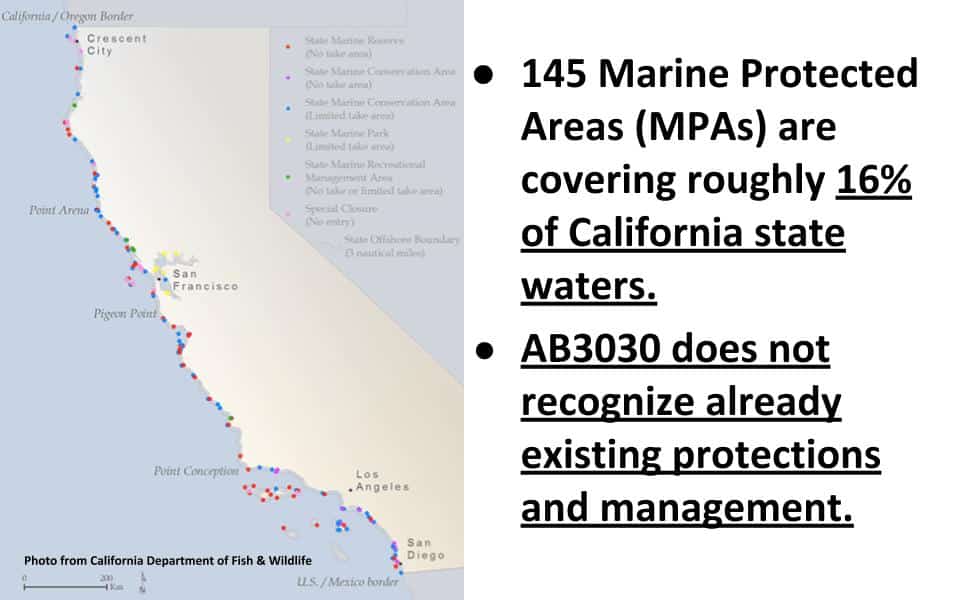 July 7, 2020: The Coastal Conservation Association of California (CCA CAL) reports that opposition to Assembly Bill 3030 is surging as anglers, hunters and other sportsmen throughout the state learn frightening prospects of this legislation that threatens fishing access to 30 percent of the state’s coastal waters, as well as 30 percent of land areas and inland waters.

“As word has spread, the sportfishing and outdoor recreation communities have galvanized in opposition to AB 3030,” said Wayne Kotow, Executive Director of CCA CAL. “Thousands have visited the CCA CAL website and taken action by clicking on the link on the home page to send an unequivocal message to their state senators to squash this unwarranted intrusion on their right to fish.”

“Anglers are also signing the CCA CAL petition on the website to register their opposition to AB 3030,” Kotow added. “All told, this is sending a strong message to state senators and other regulators that the sportfishing community is mad as hell, and we won’t take it anymore.”

What started as an international environmental plan to restrict the use of 30 percent of all land and water is now being driven to the extreme here in California with an ocean focus on additional marine protected areas (MPAs) with AB 3030, which is racing through the state legislature.

“The sportfishing community is not against conservation, biodiversity, or clean ecosystems,” Kotow pointed out. “We agree that there is climate change that needs to be addressed along with issues of ocean acidification, and water and air pollution.  But we don’t see how this bill addresses those issues.”

To learn more about the threat of AB 3030 and ways you can help defeat this unnecessary legislation, visit www.ccacalifornia.org today.