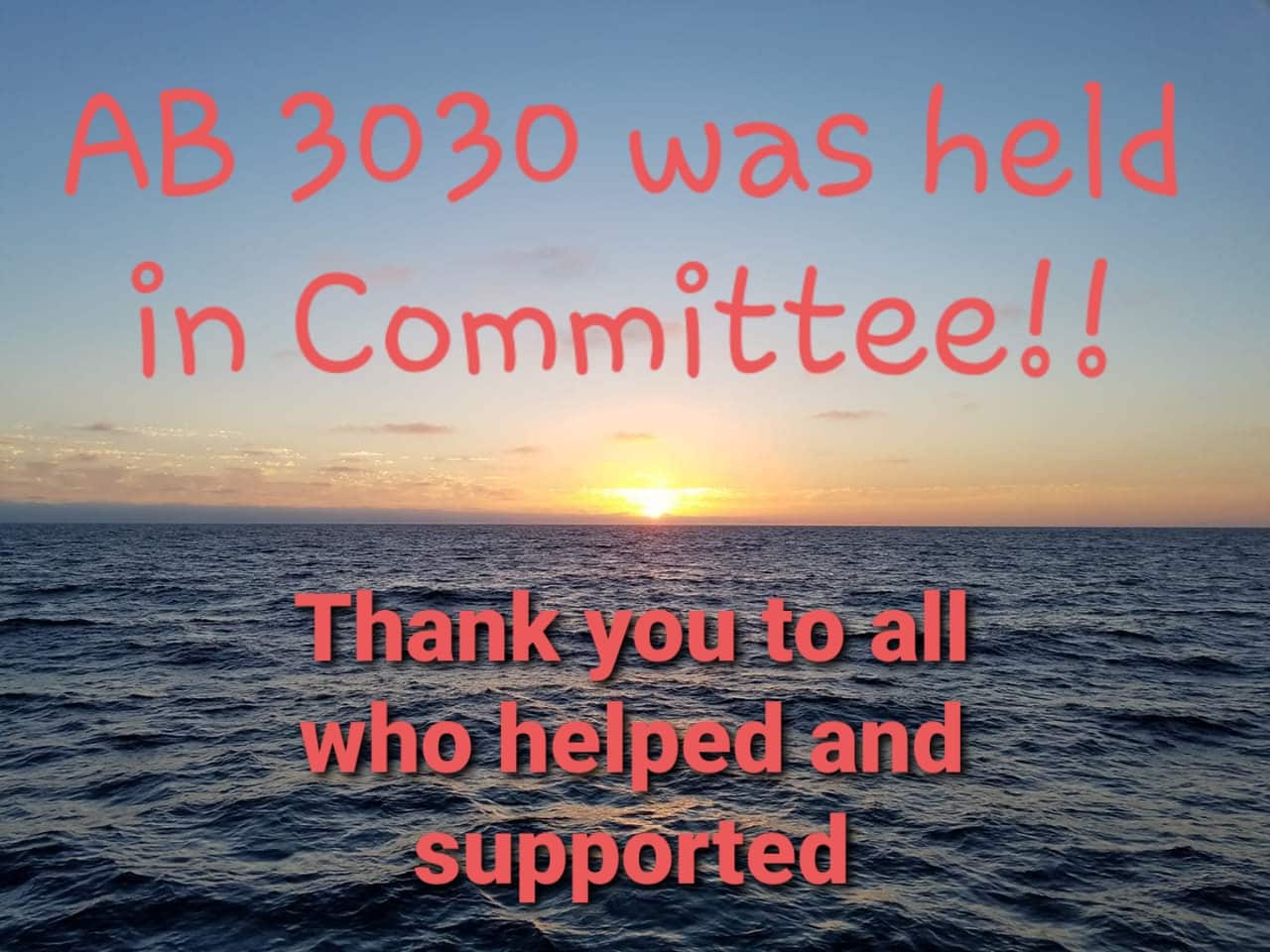 Committee Takes No Action on AB3030

The California Senate Appropriations Committee has adjourned without taking action on Assembly Bill 3030, placing the bill on hold in committee for the rest of the current Senate session. Consequently, AB 3030 will not move to the California Senate floor for a vote this year.

“Unfortunately for the bill’s sponsors, they were unwilling to work with us in good faith on our suggested amendments,” said Wayne Kotow, Executive Director the Coastal Conservation Association of California (CCA CAL), which has led the sportfishing community’s opposition to AB 3030.

“We are deeply invested in conservation and environmental protection. However, the proposed legislation failed to recognize that biodiversity protection and sportfishing may coexist without the need for indiscriminate closures,” said Marc Gorelnik, President of Coastside Fishing Club and Chairman of the CCA CAL Government Relations Committee. “We were not successful in getting the bill amended to protect existing access for the California sportfishing community.”

Director Kotow, along with other members of the sportfishing community and coalition partners, testified remotely before the Senate Appropriations Committee in opposition to AB 3030 as it is currently written.

Though AB 3030 has been placed on hold for this session, its sponsors will likely attempt to resurrect the bill next year, Kotow notes. “We hope in the next go-around, the sponsors will see fit to work with stakeholders such as the sportfishing community and others to help ensure that the language in the bill is something we all can accept,” he said.

Director Kotow also expressed thanks to the thousands of anglers who visited ccacalifornia.org to send Voter Voice letters to their state senators, sign the CCA CAL petition and contribute funds to CCA Cal to help defeat AB3030. “We could not have done this without the immense support of the sportfishing community, fishing clubs and Facebook fishing groups. For that we are deeply thankful,” he said.

“We also owe a huge debt of gratitude to our steadfast partners in the shooting sports, offroad, farming and real estate industries, as well as many California water districts,” he added.

Kotow also added perspective to CCA CAL’s effort on this issue. “It is vital to remember that the sportfishing community is not against conservation, biodiversity, or clean ecosystems,” he pointed out.

“CCA CAL agrees that climate change needs to be addressed along with issues of ocean acidification, and water and air pollution. But as we explained to the sponsors, we don’t see how this bill addresses those issues.”