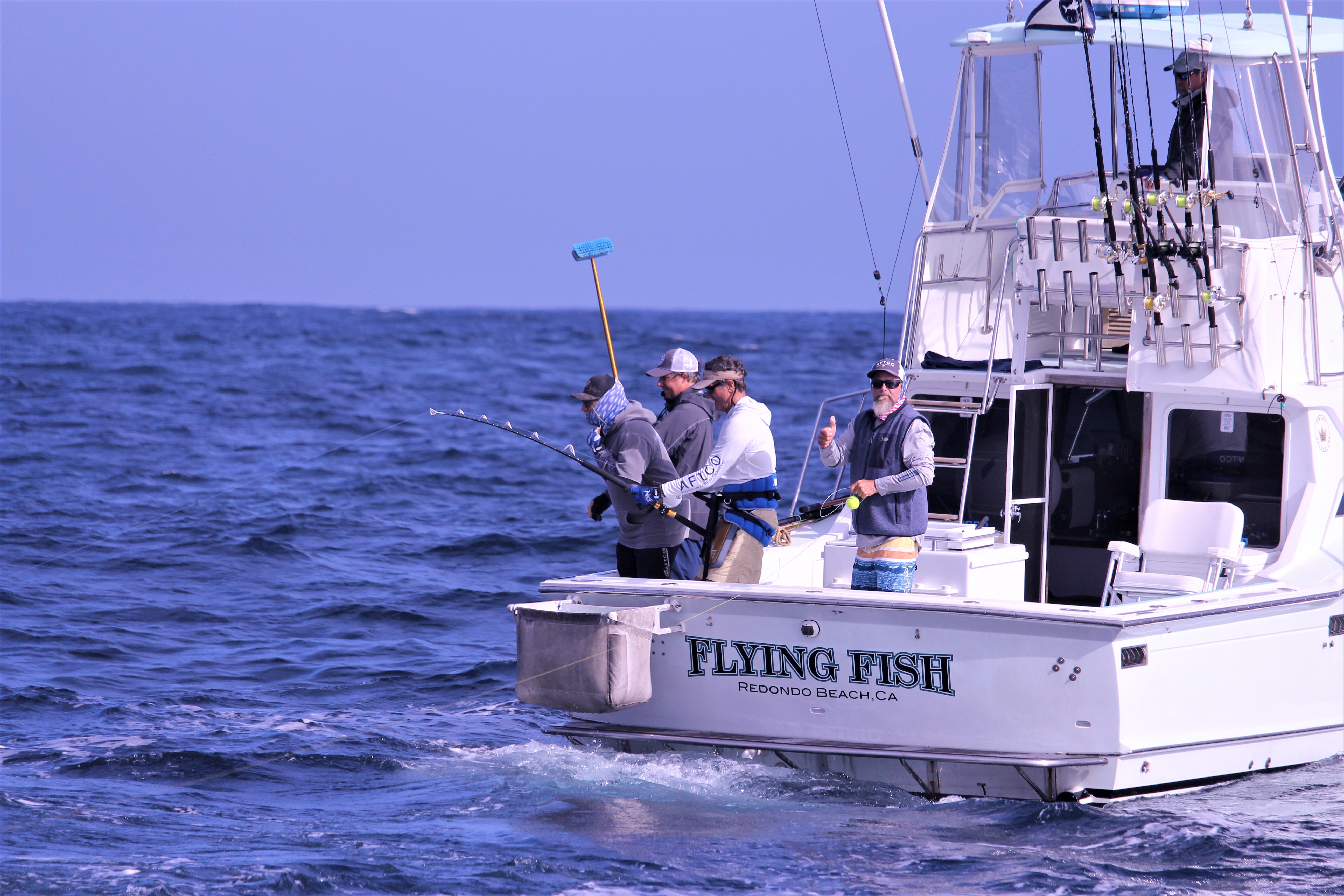 The Coastal Conservation Association of California (CCA CAL) is working with Dr. Barbara Block of Stanford University to support her Tag A Giant (TAG) Pacific bluefin tuna tagging program.  The primary goal of this new effort is to tag large bluefin weighing more than 150lbs. with sophisticated pop-up satellite archival tags that detail the bluefin’s journey over a year. The tags are implanted on the fish externally and record light, temperature and pressure. This data, along with time, allow the team to compute the track and behaviors diving in the water column for up to 1 year post release. In addition to the pop-up tags, Dr. Block’s team was using surgically placed “archival” tags that log similar data to study smaller fish under 150lbs. By using electronic tags to track the journey of the bluefin, the team can provide sophisticated spatial data to help better understand the travels of the bluefin in the Pacific Ocean and the timing of maturity in bluefin that leave the eastern Pacific to return to the western Pacific to spawn in the waters off Japan and Taiwan. In addition to Dr. Block’s Pacific bluefin tagging efforts in Southern California, CCA CAL is also helping to organize private boats to catch tuna to be tagged. 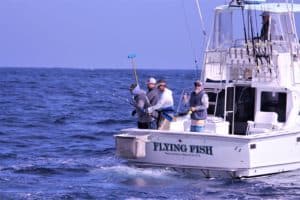 Earlier this month for three days, seven Pacific Bluefin were tagged with electronic and/or conventional tags off San Clemente Island, including one fish that was estimated to be a 250 lb. fish. That large fish was caught by CCA CAL Chairman Bill Shedd on the boat Flying Fish and transferred to the vessel Quiteña owned by Paul Fruchbom with Dr. Block and her “surgery” team, waiting to affix both an internal archival tag and pop-up satellite tag on the fish.

“By putting two tags on the animal we were are able to first track it for a year with the pop – up satellite tag which releases from the fish automatically to get one year of data. The archival is an additional tag put internally, and if it’s caught by a fisher the green external conventional tags – indicate you get a reward to return the tags. We can with the archival tag – get up to 5 years on the life of this fish”, said Block.

What makes this catch important is that it was the first time ever that Block transferred a large pacific bluefin from boat to boat to tag it. Dr. Block hopes to achieve more of this type of cooperative tagging working with CCA CAL and the sportfishing community in the future.  The transfer technique using a tennis ball to toss the tag boat’s leader to the catching vessel’s fish – is a technique that has been developed previously when the North Carolina fishery for Atlantic bluefin where Block and her team tagged over 700 bluefin at the height of the fishery. New experimental external archival electronic tags were also placed in 5 additional Pacific bluefin by the boats Joker, Fight On, Fantail 2 and It Never Ends, proving the value of having a number of private recreational boats working together.

Bluefin Tuna are a shared international resource by countries on both sides of the Pacific. Currently their overall 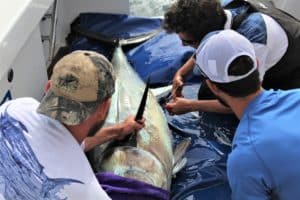 spawning biomass is considered low in comparison to the original biomass. Bluefin Tuna only spawn in the western Pacific Ocean in the waters off Japan and Taiwan. The bluefin spends its first year feeding in the waters off the western Pacific. Then an unknown fraction of the first year – and in some cases two – year old fish move into the eastern Pacific Ocean taking a 5800 nautical mile journey as a fish of less than 10-20 lbs to the California current. Dr. Block’s team has archival tagged over 700 young California current, 2-3 year old bluefin in the Pacific and learned from the data they move into our waters off the Coasts of California and Mexico – and swim from Magdalena bay to the waters off southern Oregon – in an annual cycle of north-south movements. While some of these fish swam back to the west to spawn as 5 and 6 year olds, the question now is who are the big fish off our coasts. Block’s tags have suggested they are the same “residential” fish that came over as youngsters, that remain for many years – prior to moving to the spawning ground in the western Pacific Ocean.

“The key question is when and where do these large fish go back and spawn.” Block said. 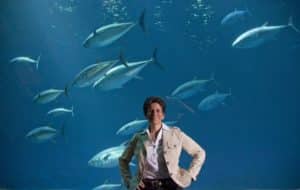 We have had year classes that are now 5-8 here in California waters – and none of these fish we have examined, particularly the females, are reproductively active – so it leads us to believe the fish are spawning at approximately 8 years of age or older – much like the Atlantic Bluefin Tuna population of the Gulf of Mexico. Dr. Block believes that once a fish reaches 7-8 years of age (250-300 lbs.) they travel back across the Pacific to spawn.  Current fishery models of the Pacific bluefin tuna run by the international committee that manages the tuna, called the ISC, utilizes an age to first reproduction of 3-5 years of age.

Understanding the actual spawning age is critical to the future survival of the Pacific bluefin and estimates of their spawning or adult biomass. Even though our recent bluefin tuna fishing here has been off the charts due to our water conditions and the abundance of anchovies, the total population of Pacific bluefin is in very poor shape.  The main reason for that is because too many small fish are caught by Japan, Korea, and other foreign countries on the Western side of the Pacific. Large breeders are caught by Taiwan and Japan on the spawning grounds. Once bluefin arrive on our coasts they also have commercial pressure while in Mexican waters.  Having accurate age info of spawning is a critical piece to solving the management of Pacific bluefin across the Pacific basin.

Now with this year’s success of transferring a large bluefin from boat to boat, CCA CAL looks forward to bringing others in the sportfishing community together to support an expanded archival and satellite tagging program in 2019 with Dr. Block focused on large bluefin. Dr Block believes that if the local anchovy population continues to stay abundant, we have more years to come with these large fish in our waters.

Stay tuned as much is still to be done to help bring back the Pacific bluefin tuna population.